2. Flying to and from Italy

Maggie arrives at the Campiello Albrizzi

Maggie (and we) made it back to to Venice yesterday after two flights and a change of planes at Paris Charles de Gaulle Airport. The flights and connection were uneventful, although we heard Maggie barking from the hold before take-off at CDG.

Everything went smoothly until we reached Venice Marco Polo Airport and discovered that one of our suitcases was missing. Durant had to wait in line three full hours to file a claim. (At least 20 other people--many from the same flight--were also missing bags, and each had to provide a long list of details (including such esoterica as frequent-flyer numbers) before the claim could be submitted.)

We'll post a video of Maggie's air travels in the next day or two, but in the meantime, here are four snapshots from our arrival in Venice: 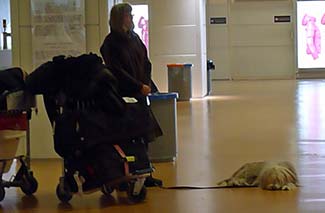 ABOVE: Maggie and Cheryl enjoy a 100-euro ride by water taxi from the airport to the sestiere of San Polo in Venice. 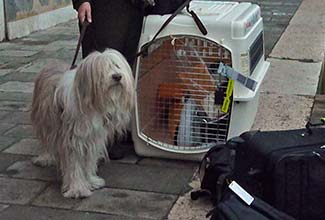 ABOVE: Having survived the transfer from the water taxi to dry land (a process that involved two people hauling a reluctant dog from ship to shore), Maggie stands by her crate on the Fondamenta della Riva dell'Olio. ABOVE: Cheryl and Maggie pose by the front door of Ca' Albrizzi, our home for the next few months. 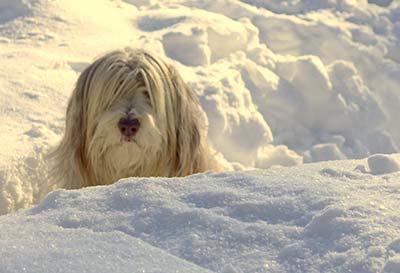 ABOVE: Maggie would rather risk a blizzard in Paris than pay 150 euros to change planes in Amsterdam.

Maggie is heading back to Venice later in the week, with a change of planes at Charles de Gaulle Airport in Paris.

When we fly without her, we normally take a transatlantic flight to Amsterdam, then catch a KLM Cityhopper flight from Schiphol Airport to Venice's Marco Polo Airport. This isn't practical when we're traveling with Maggie in the winter, because KLM doesn't carry pets on the AMS-VCE route from November to March. (The baggage compartments on its Fokker Cityhopper jets aren't warm enough for animals in winter.)

At first we were disappointed that we couldn't fly with Maggie through Amsterdam, but recently we discovered that we may be better off skipping Schiphol with a dog in tow:

At Schiphol Airport, KLM charges a mandatory "animal care" fee of 150 euros, 200 U.S. dollars, or 200 Canadian dollars for pets traveling as checked baggage that lay over at Schiphol for more than two hours. This fee (which other writers have described as a "pet tax") is more than twice the price of a four-hour stay at Schiphol's Yotel for human travelers.

Schiphol Airport has always been as much about commerce as about flying (it has so many shops that it often feels like a mall with airplanes), but charging 150 euros for a plane change that runs longer than two hours strikes us as being outrageous--no matter how nice Schiphol's animal facilities might be.

Flying from Venice to JFK 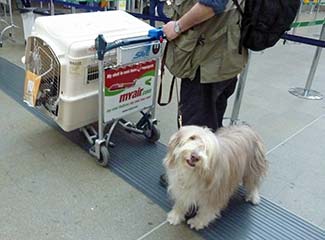 ABOVE: Maggie checks in at Venice's Marco Polo Airport for her flight to the United States. INSET BELOW: Maggie, Chester, and friend. 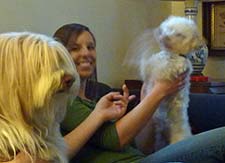 Maggie is back at home in the United States, where she'll stay until we return to Venice in the winter. (Ever since Johnny Depp and Angelina Jolie left Venice, Maggie has wanted to spend time with her family and friends back home--including Chester, the hyperkinetic little dog in the photo at right, who lives next door to our son and daughter-in-law and often comes over to play when Maggie is visiting.)

The trip from Venice to the U.S. wasn't a disaster, but it went less smoothly than our eastbound flights.

Checking in was easy:

Going through immigration and changing planes at New York's JFK International Airport was another story. We had 3-1/2 hours between flights, but we almost missed our connection. Here's what happened:

We managed to catch our connecting flight, and so did Maggie.

Later, when we arrived at our home airport, we noticed that a Delta JFK Ground Crew rubber band was clipped to Maggie's leash. Once again, Delta's JFK ground crew had taken care of Maggie during her layover.

If only Delta and JFK management had been half as competent as the airline's ground crew and baggage handlers, going through Customs and connecting to a domestic flight at JFK might have been more pleasant than it was--and less likely to make us dread the thought of another trip through JFK.