Can a Beardie be excess baggage? 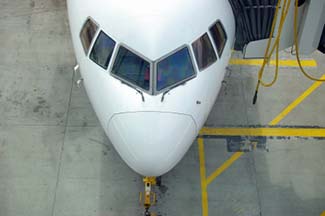 ABOVE: Barring unpleasant surprises, Maggie will join us on a Boeing 767 flight from JFK to VCE.

Arranging Maggie's transportation to Venice hasn't been easy. In December, a Delta Air Lines cargo agent quoted us an air-cargo rate of $843--not cheap, but not enough to cause panic, either. However, when we went to book Maggie's flight in early January, Delta insisted that its JFK-VCE cargo service didn't accept live animals--regardless of what we might have been told earlier. Taking Maggie as baggage didn't appear to be a realistic alternative, since Delta wouldn't accept pets when the local temperature was below 20 degrees Fahrenheit (as it often is at our airport in late January).

The next-best cargo option appeared to be Lufthansa, which didn't serve our city but had an interline arrangement with United. The quoted fare, however, was mind-boggling: $416 for a 400-mile domestic segment on United Airlines, plus another $1,400+ for the Lufthansa flights. The one-way total was twice what we were paying for our roundtrip Delta tickets--and, unlike Maggie, we were entitled to meals, free drinks, and a movie.

Then we got our first piece of good news: Delta had just changed its minimum-temperature from 20 degrees to 10 degrees. This meant there was a good chance that we could haul Maggie to Venice with us as excess baggage, and for a mere US $230 one-way. Her #500 "Extra Large" crate would even fit in the Embraer 75 commuter jet that we were taking from our home city to JFK.

There was only one only catch: If the temperature was below 10 degrees on our day of departure, one of us would have to stay behind with Maggie until the weather got warmer--and to add insult to injury, we'd have to pay a penalty of $250 to $500 for changing our flight(s). Still, at least we'd found a way to get to Venice with Maggie, and at a reasonable price. Now all we have to do is watch the weather reports and hope there isn't a cold snap at our local airport on the day we're scheduled to fly.