Last night, in St. Mark's Square, a little boy (we're guessing he was about three years old) ran up to Maggie and patted her gently.

A few minutes later, he showed up again.

He then abandoned his family and ran toward us a third time to rub her hair and admire her pinkish-purple nose. (Nobody has ever shown that much interest in us, but that's to be expected, since we lack the Bearded Collie cuteness gene.)

Maggie took the attention in stride, as you can see in the video above. She'll be seeing our small grandson soon, so tonight's encounter was good practice at pretending to be a stuffed animal. 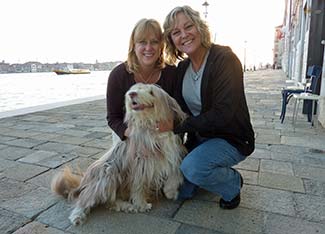 ABOVE: Sherrie and Sarah from Orlando pose with Maggie on Venice's Zattere. INSET BELOW: Sarah tries to control Venice's oldest puppy.

From time to time, people approach us because they recognize Maggie--who looks more distinctive than we do, especially in a city where Bearded Collies are seldom seen.

Just the other day, Durant was lounging on a park bench in the Campo San Giacomo dell'Orio when a pleasant young woman from Los Angeles recognized Maggie and sat down for a chat. Her name was Hillary, and she was traveling in Europe for seven weeks with Mr. Darcy, her cute--and conveniently portable--Pomeranian-Chihuahua mix. (Unfortunately, Durant didn't have a camera with him and wasn't able to record the encounter.)

This evening, we were walking on the Zattere when an American woman said "Hi, Maggie." She introduced herself as Sarah and said that she's been following Maggie's blog.

Sarah and her friend Sherrie had flown to Venice from Orlando, Florida to celebrate their birthdays, and they were staying in a cozy, attractive studio apartment owned by the Pensione Calcina (which is just down the fondamenta from the apartment). The two women were kind enough to pose with an adoring Maggie and consented to having their photos published here.

A cone for a cane

Whenever we eat gelato in Venice, Maggie (like any cane, the Italian word for "dog") does her best to make us feel guilty enough to give her a piece of the action.

We're not stupid enough to give her ice cream (there's no telling what it would do to her digestion), but we do share the empty portion of a cone with her after we've finished off the gelato.

Here's a short video of Maggie crunching a cone in the Campo Santa Margherita: