Beardie on the run 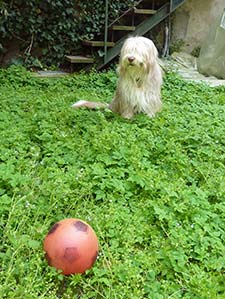 ABOVE: Maggie ignores an opportunity to play fetch in the garden behind our flat.

At home in the United States, Maggie never goes outside without a leash unless she's in our back yard. In Venice, where most dogs run free, we've normally kept her on a lead (except in our back garden, which she's found boring) to keep her from falling into canals, wandering into bakeries, and getting lost in crowds.

Recently, however, we discovered a perfect place for Maggie to run without getting herself--or us--into trouble: the Rio Terà San Tomà, which is a long, wide street behind the State Archives just north of the Frari Church. It's a dead-end street with very few pedestrians, and the only thing a dog owner has to worry about is the open door of a university foodservice building on one side. (Maggie has sniffed and approached the door a few times, but we've managed to keep her from venturing inside for a snack.)

In the video below, you can see Maggie's hair flying in a self-induced breeze as she runs back and forth between us with praise and snacks as rewards. You'll also hear an amplified adult voice and children's happy cries from a church or school carnival on the other side of a graffiti-covered wall at the rio terà's dead end.

(Trivia note: A rio terà is a street that was made by filling in an old canal. There are quite a few of these in Venice, and they're called "rio terà"--which literally means "earth canal"--to distinguish them from calli or ordinary streets.)

A watchdog in Venice ABOVE: Surly junkyard dog or easygoing ball of fur? Watch the short video below and decide for yourself.

Burglaries are rare in Venice, so watchdogs tend to get out of practice. The dog in the video below (also shown in the photo above) took nearly half a minute to react to the prowler who was peering into its corte with a camera.

In truth, the dog probably wasn't standing guard at all: It's a placid older dog that we've often seen lolling in different spots around the neighborhood with its middle-aged owner. And its quiet corte isn't a bad place to spend a morning or afternoon on a tie-out cord, at least for a dog that appreciates having flowers on the wellhead and just enough passersby to keep boredom at bay.