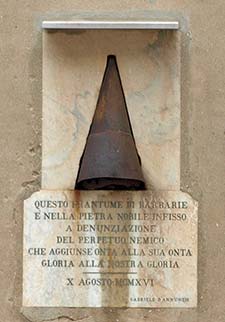 ABOVE: An Austrian shell fragment from 1849 decorates a wall in the Campiello Albrizzi.

In the winter of 2010-2011, Maggie will be living in a new rental apartment in Venice (that is, if you can apply the word "new" to a flat in a palazzo that has been owned by the same family since the 18th Century).

The apartment is in the Campiello Albrizzi, near the Campo San Polo, and we booked it through Homeaway.com. The owners claim to love dogs, and Maggie is easy to love, so we anticipate a happy relationship with our landlord and landlady.

The Campiello Albrizzi is notable for an unusual landmark: a shell from the Austrian siege of Venice during the Revolution of 1848-1849, which set fire to the Palazzo Albrizzi and subsequently was mounted on a wall with an inscription by Gabriele d'Annunzio. (See top photo.)

D'Annunzio's text proclaims eternal enmity toward the Austrians, but today's Venetians--and Austrians--seem to have moved beyond their 19th Century antipathies.