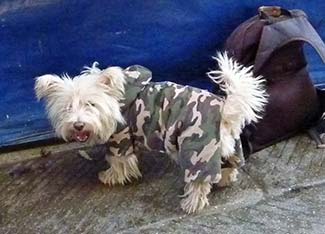 ABOVE AND INSET BELOW: A Westie of the Italian Army's Cani Carini unit plays the cuteness card in the Campo Santa Maria Formosa. 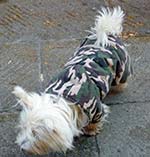 Not so many years ago, it wasn't uncommon to see Italian soldiers with large German Shepherd dogs in the immigration and customs area when you arrived at Venice Airport.

Today, the Italian government is experimenting with a kinder and gentler approach by using West Highland White Terriers and other cute dogs to disarm terrorists and other criminals (figuratively, if not physically) as they enter the country and move about the city of Venice.

("Even bad guys say "Aw..." when they see a cute dog. If we can melt their hearts with an adorable animal, they'll think twice about engaging in inappropriate behavior.")

Bottom line: If you're approached by a West Highland White Terrier or a Dachshund in military camouflage during your trip to Venice, don't be alarmed. The dog hasn't been trained to hurt or intimidate you--it's there for your protection.