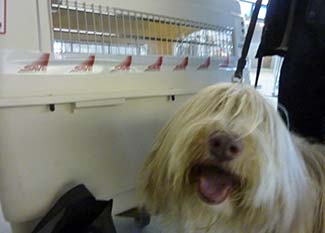 ABOVE: Maggie poses with her Kennel-Aire crate at Paris CDG Airport.

We flew back to the U.S. with Maggie on March 19, since our new granddaughter was expected to be born on April 1.

As matters turned out, Azalea Dorothy Imboden arrived a few days early, on March 26, which gave us just enough time to recover from jet lag before seeing our new member of the family.

Although the new baby's arrival held no surprises, the same couldn't be said of our journey with Maggie: We missed two connections on what was supposed to be a one-connection flight, and Maggie arrived at our home airport before we did. Here's a chronology:

Saturday, 7 a.m.: After getting up at the crack of dawn to catch a water taxi from the Grand Canal to Venice Marco Polo Airport, we waited for our Air France flight to take off in an early-morning fog.

Saturday, 11 a.m.: We arrived late at Charles de Gaulle Airport, where we were informed that it was too late to board our Delta flight with Maggie. A helpful ticket agent rebooked us on a two-leg flight via Atlanta, so we walked Maggie around and outside CDG Terminal 2E until it was time to deliver her to the baggage handlers.

Saturday, approximately 8 p.m. Atlanta time: For multiple reasons (the plane being overweight in Paris, and our gate being occupied when we arrived at Atlanta), our Delta CDG-ATL flight was nearly an hour and a half late. It was obvious that we weren't going to make our 8:05 p.m. connecting flight.

After an interminable wait at passport control, we were given meal and hotel vouchers and told to take Maggie and her crate to the baggage recheck belt, where she'd be sent to an animal hospital and delivered to our flight the next morning.

Sunday, 7:30 a.m.: Maggie wasn't delivered to the plane in time for our departure, so we flew home with the expectation that we'd have to wait for her to arrive on the next flight.

Sunday, approximately 10 a.m.: We arrived at the baggage-claim area at our destination airport, where we found Maggie waiting with our two sons.

It turned out that Delta's Atlanta ground crew had put Maggie on a 10 p.m. flight instead of sending her to the overnight vet, and the baggage-office staff at our home airport had fed, walked, and played with her during the night. We thanked our prescience in sticking a "Maggie loves people" label in three languages on her crate before the trip.

As the saying goes, "All's well that ends well," and we were relieved to be at home with Maggie waiting for us and Baby Azalea still waiting to make her entrance.

Glad to see Maggie arrived safely after all that chaos. Congrats on your granddaughter.