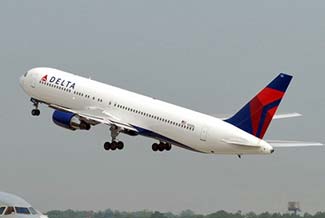 ABOVE: When your Delta Air Lines 767 flight takes off, your pet may be left behind.

A reader called our attention to a new Delta Air Lines policy on pet travel: Effective June 9, 2012, Delta no longer accepts pets in the cargo hold--whether as cargo or as checked baggage--on its fleet of Boeing 767s. (See Delta's official statement.)

This is bad news for American pet owners who live or spend extensive periods overseas, including military families at the U.S. Army Garrison in Vicenza, which is served by the Delta route between New York's JFK International Airport and Marco Polo Airport in Venice.

To make matters worse, Delta is replacing Airbus A330s with Boeing 767s on some of its other internatinal routes, such as MSP-CDG, thereby making it even harder for military families, expats, and international travelers to fly to or from the Venice area with their pets.

Our reader tells us:

"I am just about sick with the red tape trying to figure out WHO will now fly our [dog] into Venice (at this point Delta, US Airways and Continental/United have said no).  Delta said their new policy is only non-stop flights and only to Rome. Continental/United said they only fly pets into Milan and as of May 6th if you are not military you must use a third party pet courier to take the animal to the plan even if you are on the same flight!  They won't accept pets from owners.  US Airways says no pets, period."

Note: Maggie is in the United States at the moment, and we're wondering how we can get her back to Venice without subjecting her--and us--to a roundabout, three-leg flight itinerary. (On our last transatlantic journey with Maggie, we were able to use a Delta flight into Paris Charles de Gaulle and connect to Venice on an Air France A320, but Delta's new 767 policy makes that routing impossible.)

Hi!! I am hoping that you can provide me with some information!! I will be moving back to the States in Nov. 2012 and will be bringing with me my fantastic little dog!! She is 20 pounds and won't be able to be in the cabin. I usually fly out of Venice on Delta ???!!!! Do you have any advice for me? This is my first time to travel with a her and her first time, as well. What's the latest news on getting out of IT in the Venice area with a pet? Do I need to leave from Rome or Milan or Paris?? I usually always fly Delta as I have passes, but certainly will change for her sake. Thank you SOOOO much for any information you can provide!!

We haven't yet figured out a solution, but I'd suggest trying Air France. (Air France flies A320s to Paris, and from Paris, there are Air France flights to many U.S. cities.)

KLM would be even better, but unfortunately, the planes that KLM flies between Amsterdam in Venice in the winter are mostly small "CityHopper" aircraft with unheated baggage compartments.