Maggie auditions for a job with Johnny Depp Maggie is still obsessed with Johnny Depp, who continues to ignore her whimpering requests for an e-mail. Still, she refuses to give up hope: Now that Johnny owns a palazzo in Venice, Maggie is confident that her skills will lead to a job as a bodyguard for Johnny and his family.

As a herding dog, Maggie is ready to keep Johnny's kids from wandering off, and she can nip at the heels of any paparazzi who make nuisances of themselves.

So how about it, Johnny? E-mail maggie (at) europeforvisitors.com when you're ready to add a celebrity service dog to your retinue. 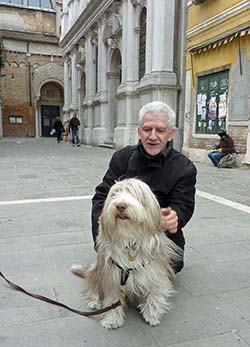 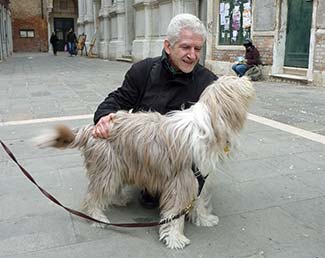 ABOVE: Georges, shown here in civilian clothes, ruffles Maggie's fur with the Scuola Grande dei Carmini as a backdrop.

This afternoon, we were walking near the Scuola Grande dei Carmini in Dorsoduro when a pleasant-looking couple looked at our canine companion and said "Maggie"? They identified themselves as Françoise and Georges of Lyon, France, and said they'd found our blog after reading La Nuova's newspaper article about Maggie a few weeks ago.

While giving Maggie a rubdown, they revealed that they had a 1½-year-old Polish Lowland Sheepdog at home named Eros (see  photo) and knew Pongo, a local dog who has been mentioned several times in this blog.

Françoise and Georges also handed us their card (shown below), which had a picture of two elaborately costumed Carnival performers, an e-mail address, and a statement in three languages that "A nice picture would make us happy!" Only after we'd said farewell did we realize that they were the couple in the photo! (Click here and here for photos of their costumes in 2010.) 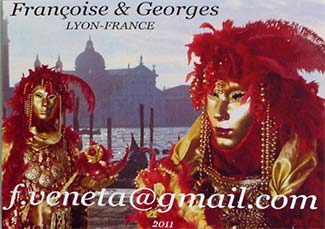 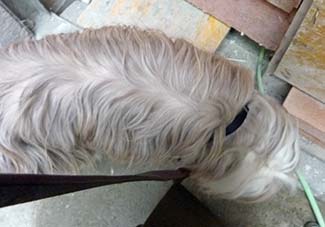